Water Bear Games began as a project during Omaha’s Startup Weekend in September 2012. Marcus Ross, an avid consumer of tabletop games, had always wanted to create games of his own and employed the help of his cousin Cara Heacock, with her artistic and design abilities, to get Water Bear Games off the ground in 48 hours. The Startup Weekend team consisted of Marcus, Cara, a college-aged business major, and a graphic designer/developer. Once the event ended and Water Bear Games placed fifth out of eight teams, WBG dwindled to Marcus and Cara.

Most of the teams called it quits after the event was over, but Cara enjoyed creating games and illustrating them so much that she convinced Marcus to continue the project. With meetings about once every one or two weeks to brainstorm and create prototypes, Water Bear Games continued on. 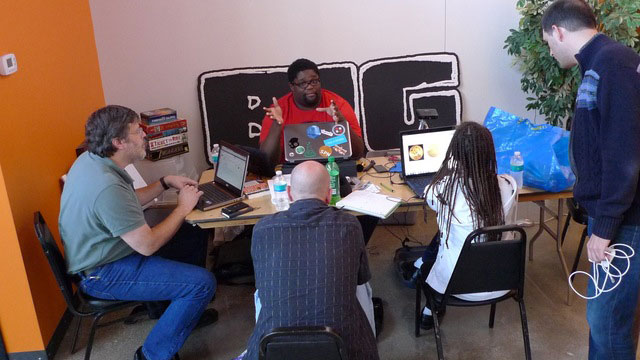 In June of 2013, Marcus and Cara decided to enter their game Discount Salmon into the first season of Cards Against Humanity’s Tabletop Deathmatch. They hoped this would just be the beginning of exposure for their games and had plans to enter other contests and continue getting feedback.

Blowing away all their expectations, Discount Salmon was selected as one of the top 16 finalists out of about 500 entries. Marcus and Cara made a spontaneous trip to GenCon in Indianapolis to present their game in front of a panel of judges and were featured in the Tabletop Deathmatch web series.

If placing in the top 16 wasn’t exciting enough, Discount Salmon became one of two winners of the Tabletop Deathmatch. The awesome folks at Cards Against Humanity funded the first printing of Discount Salmon and also provided graphic design services to help make Discount Salmon what it is today.

In 2016, Water Bear Games partnered with Action Phase Games to release BEEEEES! (with five e’s, the five e’s are important). We ran a Kickstarter campaign in March 2017 and are scheduled to have BEEEEES! available in August.

Marcus and Cara continue to brainstorm more game ideas, and mostly have their hands full promoting and selling Discount Salmon and BEEEEES!, and trying to figure out what to do with their latest game Slapdash.